May 29, 2018 – These days, good help is hard to find, but for Boys & Girls Clubs of Maury County, Resource Development Director Lauren La Porte has been a model employee from the start. Recently Lauren received the national “Newcomer Excellence Award” from Boys & Girls Clubs of America (BGCA) at their annual national conference in San Diego. The inaugural award celebrates an individual who, in less than 24 months in the role, has brought significant and positive change to their Club and community. 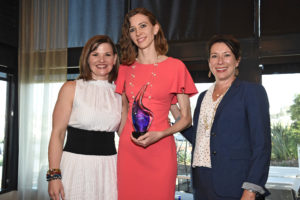 Photos from the BGCA 2018 National Conference, Thursday, May 3, 2018, in San Diego. (Dan Steinberg/AP Images for Boys & Girls Clubs of America)

“I moved from Florida to middle Tennessee in 2013 and began my career with the Club as an AmeriCorps VISTA (Volunteers in Service to America),” said Lauren. “VISTAs serve as passionate catalysts for change, living and working alongside community members to advance local solutions.”

As a result of Lauren’s two-year VISTA project to create a comprehensive program evaluation and data collection system, BGC Maury received the Southeast Region Data Impact Award in 2015; and, once her VISTA project concluded, the Club hired her as its full-time Data & Grants Manager.

“I’m really passionate about the work I get to do with our amazing supporters,” said Lauren. “For non-profits who rely on the community’s generosity, it is much easier and more cost effective to build strong relationships that retain and grow support from our existing donors than it is to acquire new ones. In the last three years, the systems I’ve implemented have increased our donor retention rate by 15 percent, allowing us to serve even more kids.”

The hire couldn’t have come at a more critical time in BGC Maury’s history as the Club underwent a massive expansion in 2016, assuming operation of 11 school-based sites in less than three months while also maintaining the Club’s stand alone Teen Center and Wayne Street locations in Columbia. Lauren stepped into the role of Resource Development Director during this time, managing all donor communications, the Club’s annual “Be the One” campaign, social media and marketing, photography, graphic design, grant writing and management, as well as assisting with the organization’s numerous special events. As the Club’s budget has increased by 170 percent, Lauren is now personally responsible for efforts to raise nearly $1 million annually.

“As hard as it was to nearly triple the size of our organization in just a few months, I was grateful for the opportunity to be a part of it,” said Lauren. “I fell in love with the kids we serve from day one, and seeing them grow and realize their full potential is the best part of my day.”

When she is not changing the world through development, Lauren spends any spare moments she has volunteering with the Club kids and tutoring during Power Hour. One young Club member has bonded so much with Lauren that she calls her “mom.”

To learn more about Boys & Girls Clubs and the life-changing work that Lauren and the rest of the team do each day to empower kids living in Maury and Giles counties, visit our “About Us” page.