From the March 28, 2018 Edition of the Columbia Daily Herald by Editor James Bennett:

When Isaiah Bullock visited the Boys & Girls Clubs of Maury County for the first time, Chauncey Julius saw a teenager with a nice smile filled with challenges and potential. 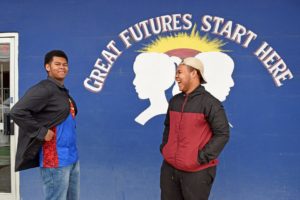 The Central High School student was moving to Columbia from Mt. Pleasant in 2015 and was looking for new friends and opportunities when he walked into the building downtown. He came from a broken home, but came into the club with a leader’s heart.

“I remember his smile,” said Julius, the Clubs’ Teen Center Director. “There was just something about him that looked different. He had an aura about him. I noticed his manners. I could tell he was raised right. He said, ‘Yes, sir, no, sir.’ He looked me right in the eye and gave me a firm handshake. He had a lot of the intangibles you don’t see today.”

Three years later, the 17-year-old senior was polished and poised enough to enter the Boys & Girls Clubs’ State Youth of the Year contest in Nashville. He finished as the first runner-up Wednesday and won an $8,000 academic scholarship from the Tennessee Titans Foundation.

“He believed in himself. He believed he could be better,” Julius said. “In the vision he has for his own life, he wants better. When he comes to the Boys & Girls Clubs, he developed a belief in us. We’re big on character development. We’re big on academics. We’re big on making healthy decisions. He wanted it. He wanted to be a leader among his peers. If I had a club full of Isaiahs, my job would be a lot easier.” 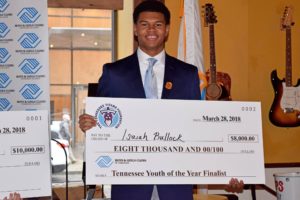 Bullock’s finish marks the fourth consecutive year the Maury County club has been the winner or runner-up. In 2015 and 2016, Ketron Hatton and Brandon Levier of Central High School won the state title. Last year, Jessica Harrison of Spring Hill High School was runner-up.

“At first, I could tell what I was communicating wasn’t getting through to him,” Julius said. “He didn’t believe in the Club at first. After spending time together, we developed an awesome relationship. He has become a special kid, a real leader. Every time I turned around since that first summer, Isaiah was growing in character, socially and academically, the whole nine yards. He’s looked up to as a leader at the Club.”

The leadership qualities seemed to come naturally. After a few months at the Club, Bullock noticed younger kids were gravitating to him. He thought it was just his smile at first. Then someone told him he was a role model because of his volunteer spirit and empathy for others.

“That made me feel good because others were watching me, seeing me as a leader,” said Bullock, who played football in Mt. Pleasant, but decided not to try out at Central. “I like helping people. The Club has helped me to become the leader that I never knew I could be.” 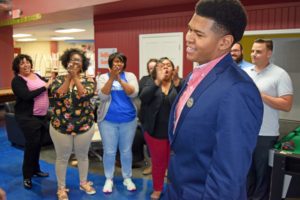 “Mr. Chauncey showed him what it takes to be a man,” Boys & Girls Clubs of Maury County CEO Robyn Peery said.

Bullock says, “Mr. Chauncey has believed in me and encouraged me when so many others in my life didn’t. He has shown me what it truly means to be a man and a father.”

The acceleration was no accident, Peery said. Bullock worked hard and volunteered for nearly every community service project.

“Isaiah has been a sponge. He has soaked it all it,” she said. 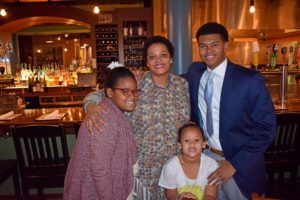 “I asked one of the judge’s at the state contest, ‘What do you see in me?’ He told me that when he sees me, he sees the future,” Bullock said. “That’s inspiring to me. The judges also told me I am an inspiration for the other kids here at the club and to my siblings.”

Bullock’s mother, Tina, has three other children. His father has children, but Bullock’s not sure how many. He lives with his mother and works part time at Taco John’s on Nashville Highway.

“I have gone from living a life in the shadows to being a light for others,” Bullock said.