“We’ve had a lot of struggles in school and trying to figure out what we were going to do after school,” Kaiden’s mother April shares. “We tried other programs, but it wasn’t successful. Kaiden was bullied in one of the other programs, which caused more anxiety attacks for him. They didn’t really engage him on the full days. He needs a scheduled, structured day. Another parent told me about the Boys & Girls Club and I said okay, I’ll try it.”

Kaiden attends Wayne Street, and April says she “couldn’t ask for it to be more perfect. The structure, the professionalism… Everything is wonderful. He just loves it. Everybody took him under their wing, and they take care of him. The other kids are really good with him. He has learned a lot of things and gets to be involved.”

Kaiden talks about his favorite staff member, Ms. Annie, all the time and April says “Ms. Annie tells me a lot about what Kaiden does at the Club, too. I think Kaiden tends to stay beside the teachers, because he’s still very apprehensive about many situations. But when we see other Club kids around town, they are always excited to see him and say “Hey Kaiden! We go to the Club together!”

“The Club staff talks to me a lot. I know they are paying a lot of attention to him, and that’s very important,” April says. Club activities also help Kaiden a lot. “He learned to play basketball at the Club, which is great. Going on field trips teaches Kaiden self-control, good behavior, and lets him have a good time. He is not autistic, but has a lot of the same characteristics.” 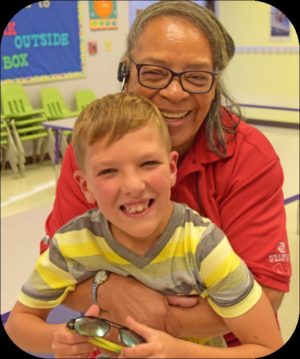 “He doesn’t do well with eye contact, he doesn’t answer open-ended questions. He is speech and developmentally delayed.” Kaiden is going into 4th grade, but he’s still on a 1st grade level.

“So he’s pretty behind,” April says. “He has an IQ of 86 so it’s possible to get him caught up, we just have to figure out how. We are doing private therapy for his speech, so I told Club staff to make him talk. Make him pronounce words, slow down, and read one word at a time. The Club helps him through tutoring. His tutor talks to me and tells me what she is working on with Kaiden, and it’s great. I can tell a difference when he is working with Club tutors. He has a lot of social anxiety, so it’s easier for him to sit out instead of engaging on his own. The Club does a good job of encouraging him to participate,” April says.

“The Club is wonderful with my child, and they love him. They feel like family, so I don’t have any hesitation about leaving him there. And I don’t leave my kid with just anybody! My in-laws are the only people who ever watch him, so that is a big deal for me. The most important thing the Club offers my family is a structured facility and a trusted place to send my child. 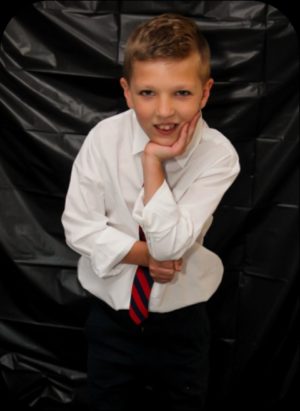 “I don’t know where else we would go. I wouldn’t put him in any other program. Without the Club, I’m not sure where else we would be able to send Kaiden and have him handle it well. For some kids, the Club may be the only place that they get one-on-one attention and nurturing,” April says.

Despite his social anxiety, Kaiden has grown comfortable at the Club. “Since coming to the Club, Kaiden seems very comfortable. You can tell he is happier. He is engaged in all of the Club’s activities, whereas he wasn’t in other programs. Kaiden is different from a lot of the other Fragile X families that I’ve spoken to. A lot of children with Fragile X aren’t even potty-trained. They are really non-verbal. Kaiden didn’t really talk until he was about 4 years old. But he is advanced, compared to other children in the same situation. I don’t think he will ever be completely independent, but he is great about getting himself up in the mornings, getting dressed, and brushing his teeth. He is very independent in all of that but he needs help with things like taking his medicine, because he has ADHD, too.”

April thanks YOU for providing the Club to families like hers. YOU provide positive, caring adults who help Kaiden grow and become comfortable at the Club.

“You are changing lives, one at a time. Whether it’s someone who doesn’t have a parent, or someone like me who needs extra help – whether it’s through tutoring, or the love that the Club offers. As our struggles continue to grow with age, everything Kaiden has taken from the Club will stick with him and benefit him in more ways than you could ever know. Thank you.”